Under the Leaning Tower in Pisa Lacorte, Sernagiotto and Belicchi unveiled the LMP2 prototype that is going to race in the 24 Hours of Le Mans and the European le Mans Series, starting from Monza these days: “The dream came true, now the real challenge begins”.

On Saturday, March 25 under such an exclusive place as the Leaning Tower in Pisa Cetilar Villorba Corse unveiled their Dallara P217 that will take part in the 24 Hours of Le Mans in June. In an auspicious rain, the entire Italian team presented their 2017 racing programme and the LMP2 prototype that will enter the legendary endurance race and the European Le Mans Series. Team principal Raimondo Amadio and racing drivers Roberto Lacorte, Giorgio Sernagiotto and Andrea Belicchi unveiled the new sportscar next to Giampaolo Dallara and Pisa's mayor Marco Filippeschi. Dallara himself said: “For sure this is a fantastic group with good drivers and a professional team. We are confident about Le Mans and I believe that we will come back in Italy with a smile on our faces”.
During this unique ceremony Lacorte was awarded by his Municipality with one of its highest honour, the “Guerriero Pisano” (“Pisan Warrior”), dedicated to Pisan citizens who have distinguished themselves in the world. During the press conference, trailer of the “Road to Le Mans” movie was presented (here is the link: https://vimeo.com/195085845). The movie will be presented in the coming weeks and describes the evolution of Lacorte and Sernagiotto's racing project now transformed in “Italian Spirit of Le Mans” thanks to the help of Villorba Corse, Belicchi and several Italian technical and commercial partners such as the main brand “Cetilar”. On March 28-29 Cetilar Vilorba Corse will be on track in Monza for the ELMS official test.
Team Principal Amadio says: “It is a special moment for our team. The dream came true and now the real challenge begins. Finally we are projected towards Le Mans, which is The Race. Our racing drivers are capable and we will fight to give our best even for the Italian colours. Let's hope that the Italian saying about the rain is true so that a rainy debut is a lucky debut”. 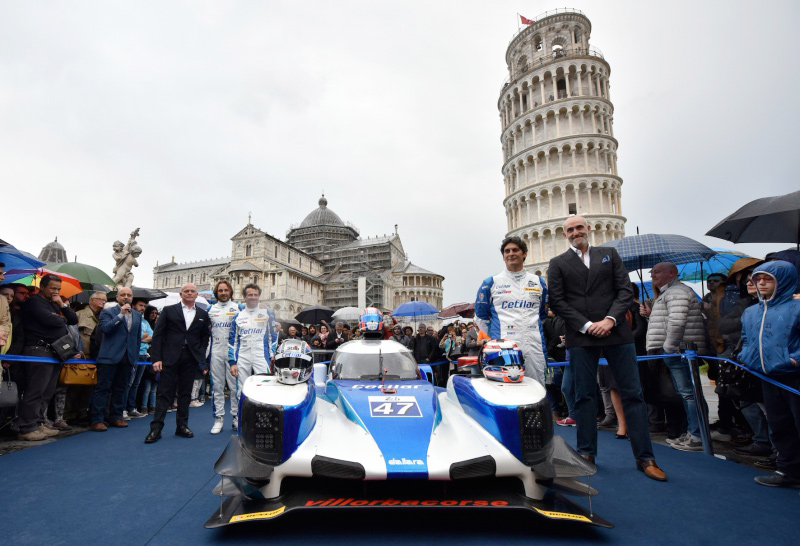